“And what of the monk Baelwich?” the boy asked.

Alternaeus smiled gently as he moved objects about the table to his satisfaction. To his apprentice he seemed harried in his manner, but also utterly engrossed and happy at his task.

“Baelwich it is hard not to love. He is fearless, and smart, and cunning, and even wise. He is one of the old monks, the ancient kind of monk,” the Wizard replied. “No matter what the high nobles and the rudely ambitious think of him I count him as one of my most trusted friends. Perhaps even, a kind of brother.”

“But he is still considered a young man, is he not? Surely he may even be younger than you. How is it then that you call him ancient?” The boy seemed genuinely confused by the Wizard’s response, or openly curious as to his true meaning. Or both.

Alternaeus halted at this labors for a moment, raised his eyebrows at the question, and looked directly at his apprentice.

“You mistake my meaning boy. He is an ‘ancient kind of monk,’ not in his mortal years but in his immortal nature. He is very much like the Apostles of old in that he fears no power on or in the Earth. His only concern is God and what is Just and Right. Such men are easy for me to befriend, and once befriended, easy to maintain in my heart. Ignorant men may call my efforts fernal-craft and sorcery, but they understand me not at all. For when it comes to what is truly essential in this world, indeed in any world, of all men there is in me no sorcery at all. Only an enchantment with the Truth.”

The boy considered the remark with some seriousness. Alternaeus returned to his labors and worked until his personal expectations were met and his meticulous arrangements fully completed. When the boy saw that the labor of the Wizard seemed finally finished he risked another inquiry.

“What then of the priest Plontius? Is he also your friend?”

Alternaeus looked at the boy somewhat skeptically and scoffed.

“As long as monks and priests are willing to martyr themselves for God, for the Right, and for the innocent then they are the most courageous and admirable of all men, and have my utmost admiration and respect. Such is Baelwich.

Yet monks and priests who watch other men struggle with wrong and will neither physically fight that injustice, nor risk the martyring of themselves to prevent such evils have neither my Earthly esteem nor the friendship of my soul.”

The boy nodded twice thoughtfully at the reply but continued to stare at the Wizard as if he still wished a more direct answer to his questions.

Seeing this Alternaeus said, “To be blunt boy, and to be brutal to your brutishness, I think little and less of the small priest Plontius. He is no friend of mine, and often I wonder if he is even a man at all.”

From the tales of Alternaeus the Wizard

Vlachus laughed at his commander and freely drank of the dark wine.

“Spoken as a true soldier. But let me speak as a former farmer and a monk of God. There is much pleasure, my friend, in the creation of new life. That is indeed true. Yet there is an even greater joy in the fostering of it.

Any man may plow the field, and enjoy the swift and sweet sweat of that labor. Yet only the True Husbandman labors long at the profit and the produce of the fruit. Sow where you can commander, but gather where you may. And if you see another field untended and the crops therein languishing to fail then are you not lawfully allowed to step into it that field and harvest what was already planted so that they are wasted not? Indeed, are you not obligated to do so?”

Marsippius looked at Vlachus in consideration of his speech, but then opened his hands as if in supplication or supposition to the priest.

“And what of you?” Marsippius asked. “Are you unfit to reap what others have sown? Are you not also obligated?”

Vlachus handed Marsippius the wineskin. Marsippius immediately noticed how much emptier it seemed. Then Vlachus wiped his mouth upon his long decorated sleeve, rubbed his hands briskly together, placed them closer to the fire and glanced admiringly upwards at the bright alien stars. Finally he looked back across the flames and drifting smoke at his friend. 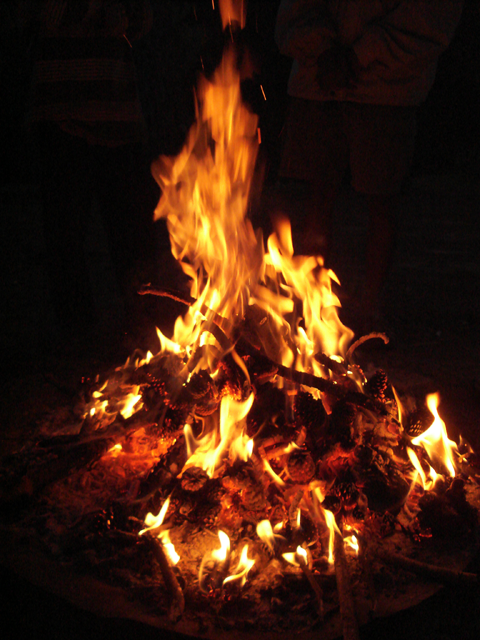 “Oh, I am certainly fit to reap and even still to sow,” Vlachus said, his long untended beard casting weird shadows in the firelight and making his face seem momentarily made more of ethereal questions than earthly answers. “Nevertheless I am a monk. I would make a far better grandfather I think than a sire. This child though needs a father. A real father, truly known and knowing. You are an excellent, if sometimes uneven commander of men, Marsippius Nicea. Furthermore I suspect that you are already a fine father as well. And would be so again if necessary. The question you must ask yourself is this: are you now the necessary man?”

Marsippius sighed and rubbed his scarred sword hand through his now lengthening hair. Vlachus’ gaze seemed to him extraordinarily bright and perceptive in the uneven light of the struggling fire.

“You are also, I have seen, an unfailingly honest man,” Vlachus said. “So, if I have spoken in error of you then correct me now.”

Marsippius studied the monk’s face for a long while, and then his gaze fell back into the fire. He would not say what he saw there, and he did not answer his friend.