My wife and my youngest daughter and I in our front yard right before going out to eat and to see Kong: Skull Island.

A picture of me and the wife on Hitching Day.

If these images don’t give you plenty of story, poetry, song, and even invention ideas then you’re probably already dead…

This is also a Vadder’s Dream.

I must Vad these places one day and I don’t even have any interest in going to New York.

1. Moving a 7600 ton apartment building to create a boulevard in Alba Iulia, Romania, 1987

This is a photograph I took and then modified to submit to a photography contest one Halloween. I think I won third place for the pic. However I never actually received my prize. Which was supposed to come by mail but never arrived.

It is of one of the first Black and Yellow Argiope (A. Aurantia) to appear near my house, years before I began cultivating and keeping them. I call the photograph, The Descent of Arachnia. After the myth. Below the pic is the poem I wrote to accompany the photograph. 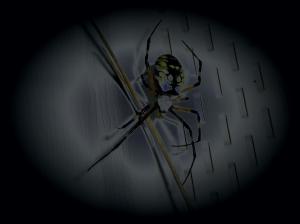 On common web that most uncommon beast
Does descend upon every unwatched fate
And threads which measure out the feast
Of living span do tremble, spin, and quake –
When hearts catch at approaching omen’s crawl,

Every man knows well though spoken not
How deep within his untangling looms,
A tremor from the center of the clot
Which darkens blood and shadows doom
When creeping eyes do find him slumber’s thrall,

Legs, long of aspect, slow, and lithe
Run out patiently with dread approach,
For nothing stems that fang which glides
Like icy limb upon the frigid throat
To close up tight in horrid awe,

She comes like shadow in the colored dark
To pluck the living fibers from men’s veins,
Descended from some ancient Wyrd embarked
Which entwines our bodies round in vain –
For no man e’er escapes that creeping maw;
When Arachnia stoops to make her final claim.

This guy’s work is absolutely incredible. I can really admire someone this good at their work. I highly recommend you take a look at it.